I shot these photos for a story in the Collegian about the talented Flint Brothers. Read it here. The brothers, students at Hillsdale, wrote and conducted the entire score for the Tower Players’ production of King Stag. Visit their website.

I learned about this story at the last minute, so I only had one chance to photograph the brothers: a 10-minute time slot during intermission at the play’s final dress rehearsal. I didn’t have time to communicate with them beforehand, so I sent someone in to the orchestra pit during a lull in their playing to let them know I had to shoot a few photos during intermission. As soon as it was intermission, I had the theatre lighting crew to turn the house lights up a little but to give me a bit of light on the background. I got Cory and Toby to come upstairs out of the orchestra pit with their original score and cello, then I threw on a wide angle lens and had Alex Cothran to hold a softbox just out of frame (one shot left, the other right) to light the musical duo. I then hurriedly got everyone back down in the pit and shot a few shots of everyone playing, lit from above camera right. The 10 minutes went by very quickly. I had to find my way out of the dark theatre as things started back up as soon as I finished shooting. 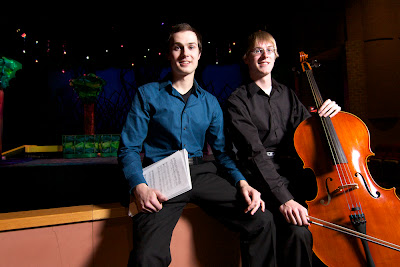 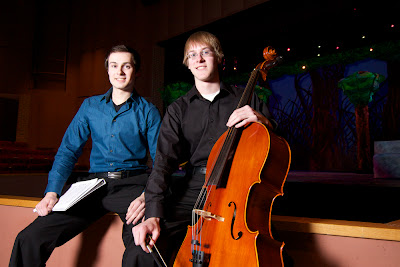 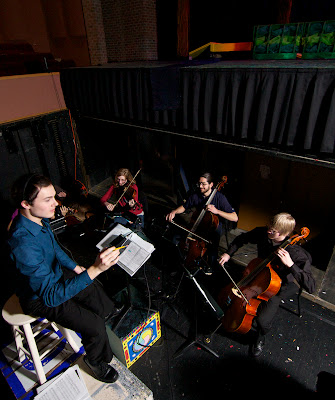