“Today I got up before sunrise, breathed in the scent of pines as I traversed the mountainside, walked through clouds above the tree line, ate lunch next to a marmot on a mountain summit, gazed upon secluded mountain lakes, and was reminded how volatile Colorado weather is as I got caught in a hail storm at 12,880 ft. Today I remembered how beautiful and complex Earth is.”

On the 23rd the Staffords and I woke up at 4:45 a.m., left the cabin at 6, and began hiking at 7 a.m. We started from Poudre Lake at Milner Pass. Our destination was the top of Mount Ida. We quickly made our way up the mountainside and emerged out of the pines and above the tree line. This was my first experience hiking in the alpine tundra. The air was a cool 40 degrees and the wind whipped by at 35 mph. The sky looked ominous and threatened rain. I knew the weather changes quickly above the tree line, so I was not terribly worried. As we hiked along the Continental Divide trail, clouds rolled in all around us. Click on the photo to see it larger. You can see Ben and Mrs. Stafford in the cloud: 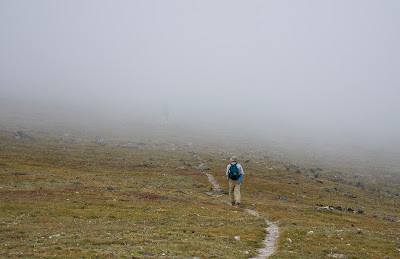 Gradually the clouds and light rain drifted off. For a while it seemed like it was clearing out just ahead of us. Then the sun broke through the ominous clouds and lit up the hillside: 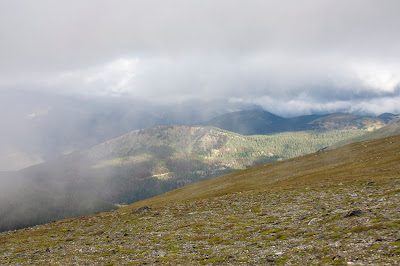 Visibility improved significantly once the sun broke through. We could the snowfields, Lake Granby of in the distance to the south, the Never Summer mountains to the west, and small lakes in the gorge to the east. Looking back on ground we already covered, I could see small unimproved trails winding across the hillside: 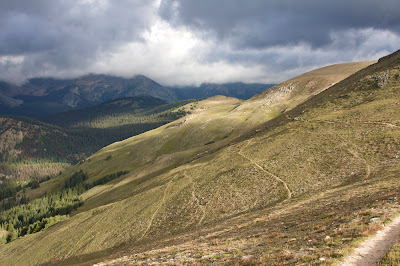 The weather as we approached the summer was wonderful. The wind died down, blue skies raised our spirits, and marmots came out of their rocky dens. Here you can see the tundra in the foreground, the Never Summer mountains to the left, and the North Ridge to the right: 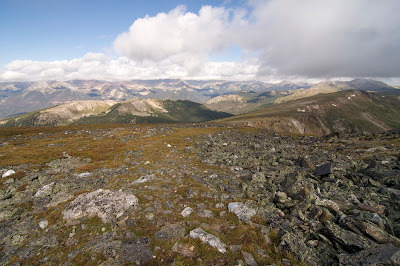 We kept good pace and ascended the rocky incline to the summit in the sun with the occasional rolling cloud. We ate lunch on the summit–for me, peanut butter on flatbread, a dried fruit bar, a clif bar, and water. A marmot came out of his summit den and ate lunch near us––a nearby tuft of grass for him. Mr. Stafford took a photo of me on the summit just before lunch: 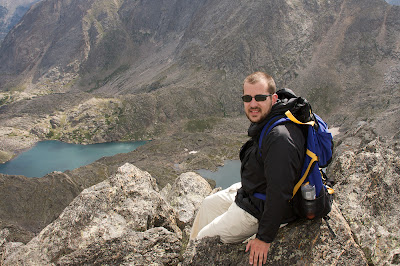 From the summit we could see Inkwell, Azure, Highest, and Arrowhead lakes. This was a special experience for me because I realized these were the lakes I saw in 2007 with my parents from Trail Ridge Road. I told myself I would one day hike to them. I realized that I was just above them!

As we sat peacefully eating our lunch and gazing upon Forest Canyon and the aforementioned lakes, Mrs. Stafford turned around to look off to the south and saw a huge storm where there was previously blue skies. It was heading our way. Not wanting to get caught in it, we scrambled to pack up our stuff. Then a problem arose. Mrs. Stafford could not find her camera. We search around for a few minutes, then I got my flashlight out and spotted it between some rocks. As I laid down and reached for it, the camera slid further down. Not wanting to waste time trying to fish it out, Ben, Mr. Stafford, and I worked together to move a few big rocks so that Mrs. Stafford could grab the camera.

By this time the wind was whipping again and it started hailing on us for a few minutes. The weather is quite unpredictable at 12,880 ft. I quickly did my 10 summit pushups as per Dr. Steele’s request, then we quickly scrambled down from the summit and began the 5 mile treck back to the trailhead in the rain. I am very thankful that I brought my rain jacket. I was freezing in the fierce wind!

After about 45minutes, the sun came back out. I shed my rain jacked and warmed up in the sun. The Staffords went on ahead while I took my time coming down to marvel at the beautiful scenery and take photos. There were still ominous clouds in the sky, but the weather stayed clear for the rest of the hike. Here is a shot looking at the North Ridge and the Continental Divide Trail: 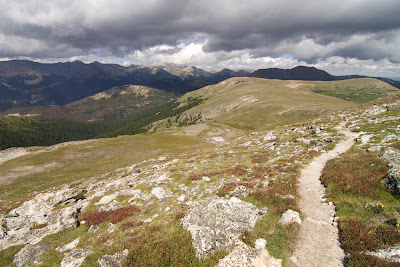 After a while I feared I was lagging too far behind, so I jogged for about 20 minutes to catch up with the Staffords. I caught up to Mr. and Mrs. Stafford, but Benjamin was nowhere to be found. He is a pretty fast hiker and was far ahead of everyone. I snapped a photo as I caught up with them: 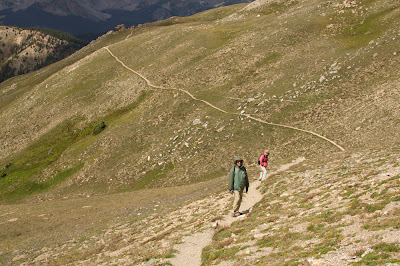 As we came back down into the tree line, we caught a glimpse of a bull elk with six points per antler. What a majestic creature! 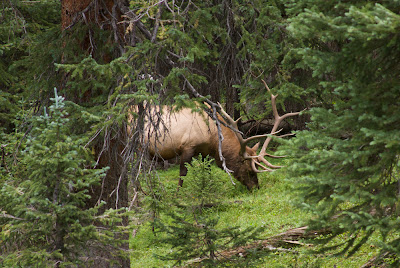 This was great hike. We experienced a 40 degree range of temperatures, multiple elements, and a few different terrains. The views were amazing. Besides for Longs Peak a few days later, this was my favorite hike of the trip.